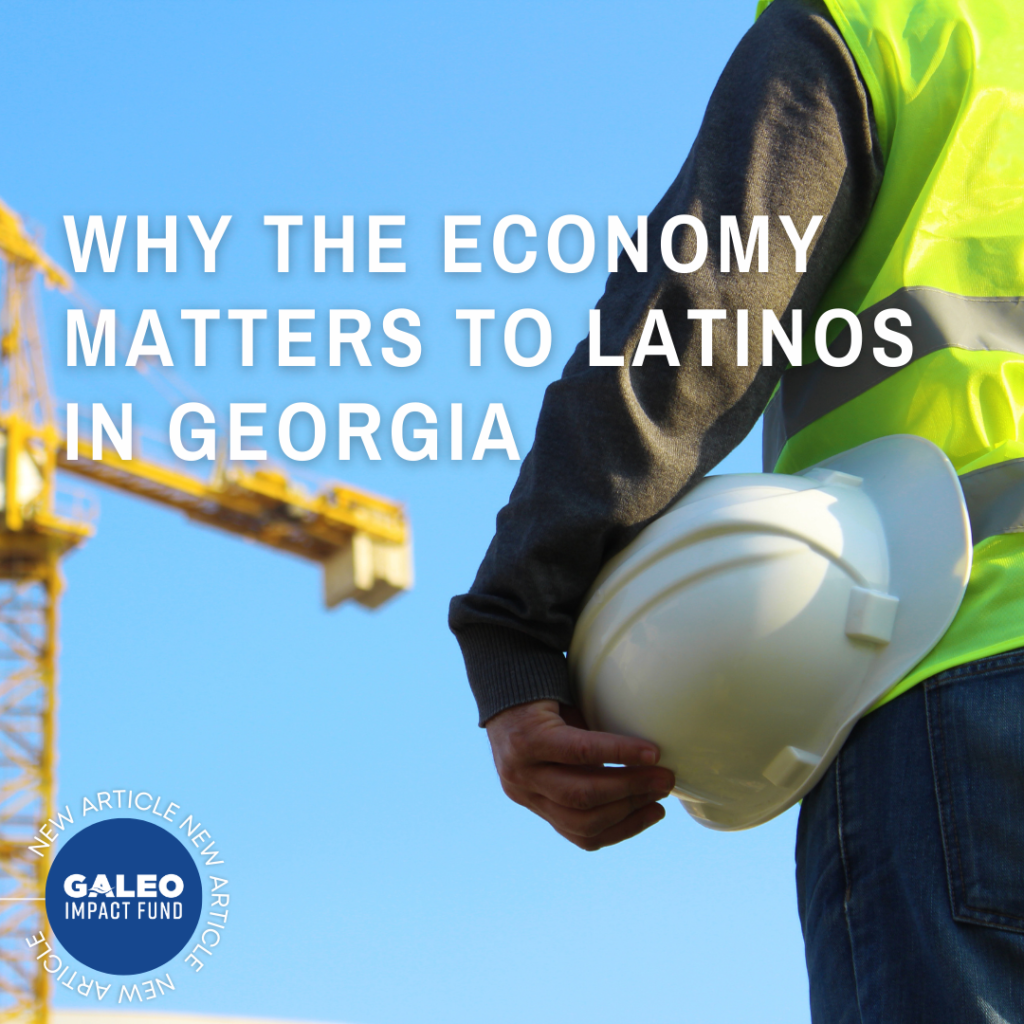 In the United States, questions of how to manage the economy have always been some of the most difficult to answer. The state of the nation’s economy is an issue of top concern to Latinos living in the United States. There are many policy actions that can have a direct impact on the economy and different rates we can use to measure the state of the economy. These actions are especially important to marginalized groups who are more likely to face economic hardships because of systemic issues in place that make it more difficult for them to gain financial security. For the Latino community in the US, this is especially true. Here in Georgia, 19.7% of the US Census recorded Hispanic population is in poverty, compared to 19.1% for the Black population and 9.1% for the white population. When such a significant portion of the community is facing these severe financial hardships, it is essential to understand what policies can have a direct effect on our community’s ability to prosper financially.

To understand the way economic policy interacts with the Latino community, first it is important to understand the different ways that politicians approach the economy. Republicans tend to be outspoken in their views on fiscal policy, often boasting tax cuts and reduced costs for big businesses and investors to increase productivity. This focus on the economy is less effective than some believe. Republican led states actually tend to have worse economic performance than states led by Democrats. Because their party’s economic theory supports government deregulation, their policies tend to exacerbate worker exploitation. A large part of the Republican’s economic theory derives from the disproven theory of trickle down economics, the idea that the increased wealth for the richest will stimulate the economy and create wealth for lower classes. These approaches do not benefit the average working class person living in the US.

The state of the economy and jobs nationwide are tied closely with several other issues like education, healthcare, and racial and ethnic equality. Reducing income inequality and allowing marginalized groups to gain economic stability is better for all of us. This means placing regulations and more equitable tax rates on big businesses, providing welfare for underprivileged populations, and protecting worker’s rights.

For the Latino community, the state of the economy is especially important. Surveys show that jobs and fiscal policy are topics many in the Latino community argue are some of the most important topics to vote on. This is because of how closely tied economic stability is to other areas of life, especially for Latinos who face higher rates of unemployment than their counterparts. Latinos tend to work jobs in construction, agriculture, and service, and risks are especially high for undocumented worker who are more likely to have jobs with poorer working conditions and lower pay. These are industries that tend to have the least amount of protections and benefits in place for their workers, and as a result members of the community suffer. Without regulations in place, worker’s rights violations will continue to happen every day and atrocities like the human trafficking network of migrant farmers recently exposed in south Georgia will continue to happen.

In Georgia, economic instability is detrimental to individuals and their families, continuing a cycle of poverty and overall lower quality of life.

A powerful way for us to start transforming our state’s economy to one that prioritizes workers and our community in its vision of prosperity is to educate ourselves and to share this information with people in our network. It will take time and dedication, but everyone deserves a living wage and the ability to prosper. At the GALEO Impact Fund, we believe that we achieve this goal by strengthening our community and holding elected officials accountable to build an economy focused on the people. The financial success of our community is the financial success of the state of Georgia.

Amadeo, Kimberly. “Democratic Views on the Economy.” The Balance, https://www.thebalance.com/democratic-economic-policies-4129140.

Amadeo, Kimberly. “Republicans Economic Views and How They Work in the Real World.” The Balance, https://www.thebalance.com/do-republican-economic-policies-work-4129139.

“Demographics and the Economy.” KFF, https://www.kff.org/state-category/demographics-and-the-economy/?state=GA.

Grinspan, Lautaro. “’This Has Been Happening for a Long Time’: Modern-Day Slavery Uncovered in South Georgia.” Ajc, The Atlanta Journal-Constitution, 3 Dec. 2021, https://www.ajc.com/news/this-has-been-happening-for-a-long-time-modern-day-slavery-uncovered-in-ga/SHBHTDDTTBG3BCPSVCB3GQ66BQ/.

Krogstad, Jens Manuel. “The Economy Is a Top Issue for Latinos, and They’re More Upbeat about It.” Pew Research Center, Pew Research Center, 30 May 2020, https://www.pewresearch.org/fact-tank/2016/07/15/the-economy-is-a-top-issue-for-latinos-and-theyre-more-upbeat-about-it/.