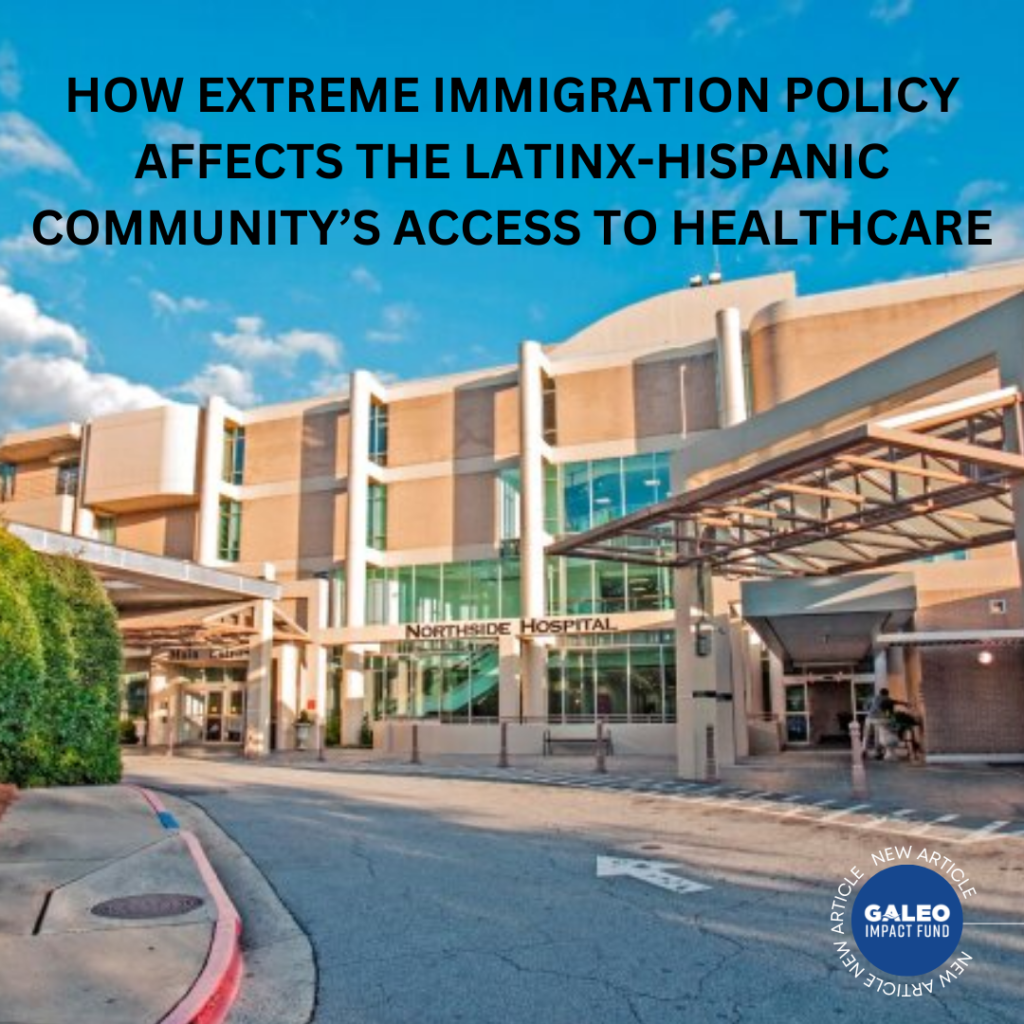 The continued criminalization and hyper policing of our community endangers us directly and indirectly.  Immigrant policing consists of federal laws, state legislation, and local police practices that affect our community to the extreme, especially surrounding receiving healthcare (Kline,2016).

In Georgia, the “Illegal Immigration Reform and Enforcement Act of 2011,” most commonly known as House Bill 87 (HB 87), created a more hostile relationship between employers and law enforcement with immigrants that make up the backbone of many of our state’s industry. The bill requires that employers demand proof of a worker’s eligibility to work in the U.S. and it allows police in Georgia  to check the status of anyone they believe could be undocumented. Additionally, the bill criminalized helping any undocumented people including transporting people to and from health services (Kline, 2016). This bill is a form of extreme immigrant policing.

It has been found that due to harsh immigrant policing laws and policies and the anxiety that comes with the thought of being deported, it prevents undocumented individuals from seeking healthcare, which creates “[…] negative systemic and mental health outcomes for individuals and familities” (Kline, 2016). Between 2000 and 2011 Georgia had a 96% increase in Latinx immigrants moving into the state and becoming residents, and besides Florida, Atlanta became the city with the largest Latinx-HIspanic immigrant population within the US South (Kline, 2016).

HB 87 has created trauma and fear for the undocumented members of our community. They feel fear in doing basic things such as walking, driving a car, and this fear extends to even getting help in the healthcare setting. Several people that were interviewed said that they had been stopped by local law enforcement while driving and were fortunate enough not to get into any legal trouble, however they now refrain from leaving the house at certain times, and don’t drive at night due to fear, even if they are in need of medical assistance (Kline, 2016). The fear of getting into legal trouble leads to reluctance of receiving treatment, ultimately leading to other health-related activities such as walking for arthritis pain in order to avoid going to the hospital/doctor to decrease the risk of deportation.

Due to the fear of deportation, undocumented members of the community have started to seek healthcare elsewhere, particularly “Latino clinics” which are private practices that have become more popular in Atlanta. However, healthcare professionals at hospitals are wary of the quality of care that Latino clinics give out because there is potential for members of the community to be taken advantage of, particularly surrounding money. Healthcare professionals have said that certain clinics can be increasing the price for certain medications and procedures, taking advantage of their patients who do not have prior medical knowledge. Members of the community also receive care from traditional healers, or even informal providers that run their practices from their own homes, which can be extremely dangerous. These informal providers may not have the proper medical training or will increase prices, which is disadvantageous to our community (Kline, 2016).

This fear of deportation leads to getting healthcare elsewhere and although some individuals have had luck, sometimes the alternative healthcare can be dangerous and there can be misinformation spread to the community. The alternative healthcare systems in Georgia specifically are also used due to prices as well – if one cannot afford healthcare due to no insurance or any other given situation, people may choose necessities such as food, rent, and utilities over an expensive healthcare bill. A lot of members in the community, especially undocumented members will only have jobs available that do not include employer-provided insurance, which is essential to getting affordable healthcare. A lot of members in the community also work jobs that are dangerous and can lead to injuries that require medical assistance. If one cannot afford the US or Georgian healthcare system, they will need to resort to alternative practices in order to get pain relief. The added stress of the potential to get deported and the economic impact that not having access to insurance has, creates a need to get healthcare elsewhere. These healthcare options can be disadvantageous to the community and can even further harm/injure the patient physically. As Nolan Kline puts it, “[…] immigrant policing impedes access to existing types of care and supports seeking care from alternative sources” (Kline, 2016).

The fear of deportation has had a lasting impact on the community. It has impacted undocumented individuals’ lives in many different ways, but especially when seeking healthcare. The fear and trauma of extreme immigration policing has led to avoiding anything that could potentially end in deportation, and seeking healthcare is no exclusion. Alternative methods of receiving healthcare are available and although some members of the community do have some luck with these alternatives, it can lead to being taken advantage of or false information on illnesses/injuries that people may have. It is important for leading members of the community, including the GALEO Impact Fund, to help push for more affordable and effective healthcare for our community. One way that we can get better healthcare options for the community is to vote for politicians who are wanting to improve healthcare and welfare programs such as Medicaid to make healthcare more accessible. At the GALEO Impact Fund, we are working hard to help our community take ownership of our own narratives and combatting misinformation with truth and dignity. We must also continue the struggle for immigration reform and a path to citizenship so that all members of our community can access the healthcare they need and help build a better Georgia.