Re: Prioritizing protections for immigrant youth and DACA recipients in end-of-year package

The over 225 undersigned state, local, and national immigrant, labor, faith, civil, health, and human rights organizations write to urge you to take action to protect immigrant youth and DACA recipients. Immigrant youth across the country have been calling for permanent protections with a pathway to citizenship for decades. The implementation of Deferred Action for Childhood Arrivals (DACA) in 2012 gave life-changing protection from deportation and the ability to work lawfully to hundreds of thousands of immigrant youth. But it has never been enough.

Early last month, DACA-eligible youth received the decision by the 5th Circuit Court of Appeals on the DACA policy and were once again left with uncertainty and a threat to their livelihood and ability to stay in the country they call home. The Fifth Circuit upheld a lower ruling finding the 2012 DACA memo to be unlawful and sent the case back to the lower court to consider the Biden administration’s new DACA regulation. Once again, immigrant youth have been left to anxiously await another court decision that will most likely upend their lives and futures. While this decision allowed for DACA renewals to continue temporarily, over 90,000 DACA-eligible youth continue to have their initial applications stalled. The writing on the wall is clear: DACA is dying. As Speaker of the House and Majority Leader of the Senate, we urge you to prioritize DACA protections in any end-of-year package.

The time to act is now, the potential incoming anti-immigrant majority in the House has been crystal clear in their opposition to providing protections for undocumented immigrants. Immigrant youth cannot continue to wait for Congress to act while the Fifth Circuit and the Supreme Court await the opportunity to terminate the program once and for all. In this time of deep urgency, we need your leadership to ensure Congress passes this long overdue and urgently needed legislation. The American people strongly support DACA, 74% of Americans favor a law that would provide permanent legal status to immigrants who came to the U.S. as children, including 92% of Democrats and Democratic-leaning independents.

The termination of DACA will be catastrophic for local communities, families and our workforce. A 2021 analysis by the Center for American Progress reports that DACA recipient households pay $6.2 billion in federal taxes and $3.3 billion in state and local taxes each year. Additionally, the data has shown that more than three-quarters of DACA recipients in the workforce – that is 343,000 DACA recipients – have been essential employees during the COVID-19. There is simply no more time to delay, protecting DACA must be a top end-of-year priority.

We cannot let this Congress pass and leave the future of DACA up to a potentially GOP-controlled House and conservative-controlled Supreme Court, the time is now. DACA recipients have lived in uncertainty and two year increments for far too long – and many more continue to live without any protections at all. We urge you to make legislation for them a top priority and ensure the passage of a final omnibus that includes permanent protections and a pathway to citizenship for the millions of immigrant youth who call this country home.

CenterLink: The Community of LGBT Centers

Congregation of Our Lady of Charity of the Good Shepherd, U.S. Provinces Disciples Immigration Legal Counsel

Save the Children Action Network

Sisters of Mercy of the Americas Justice Team

The Coelho Center for Disability Law, Policy and Innovation The Workers Circle

Justice for All Immigrants

The Association of Mexicans in North Carolina INC. (AMEXCAN) The Business & Immigration for Georgia (BIG) Partnership The Gubbio Project 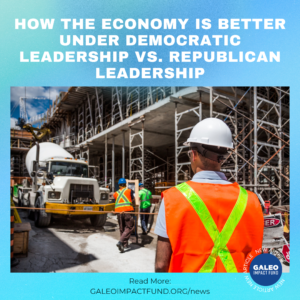 How the Economy is Better Under Democratic vs Republican Leadership

By Hye Kelly A large percentage of the community believes that Republicans and conservative politicians in the United States are beneficial for the economy. However,