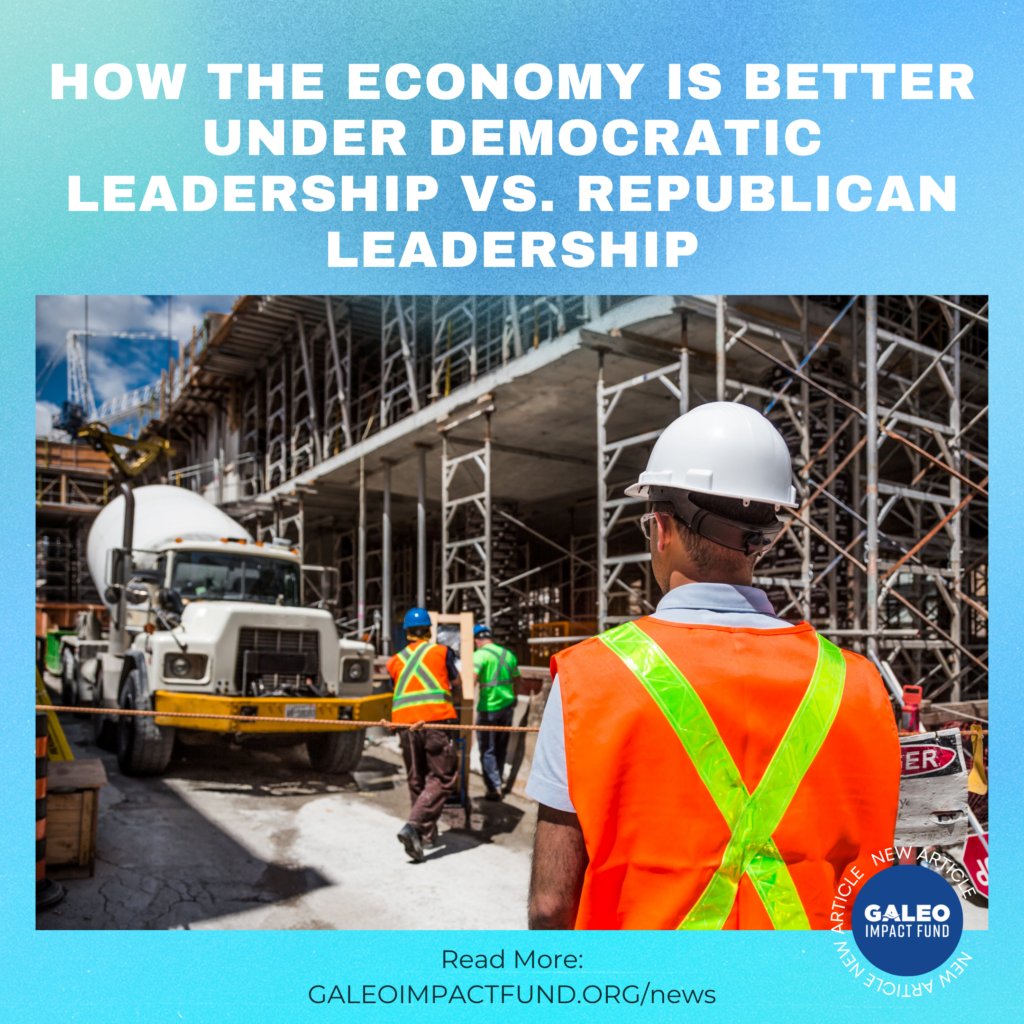 How the Economy is Better Under Democratic vs Republican Leadership

A large percentage of the community believes that Republicans and conservative politicians in the United States are beneficial for the economy. However, this narrative has been controlled by conservative candidates and leaders of the United States in order to keep power and to maintain that the new economic strategies that the Democrats and the left are detrimental to the United States. Although the presidents in the United States do not have much control over the general outcome of the economy, their policies enacted during their term have an effect on whether the economy flourishes or declines. A very specific pattern has emerged over the past 100 years and overall, the economy has grown much faster under Democratic leadership rather than Republican ones (Leonhardt, 2021).

The economy in the United States depends on several factors: gross domestic product (G.D.P.), employment, incomes, productivity, and stock prices and since 1933, the US economy has experienced a 4.6% growth on average under Democratic presidents and a 2.4% growth under Republicans (a Times analysis). In other words, the average income of Americans would be over double its current level if the economy grew at 4.6% on average for the past 9 decades, excluding the Great Depression under President Hoover.

Another narrative that the Republican party and conservatives push, which is accepted by the community is the notion that Republican leaders overall create more job opportunities, with Democratic leaders decreasing job opportunities. However, the presidents who have been in office during the fastest job growth have all been Democratic presidents: Roosevelt, Johnson, Carter, Truman, Kennedy, and Clinton. The presidents with the lowest job growth in America have all been Republican presidents: Eisenhower, GHW Bush, GW Bush, and with Trump being the lowest job growth overall (a Times analysis). Although these analyses show that it is true that the economy has done better under Democratic leadership, part of the reason why involves coincidence. When some presidents took office the economy was on the downturn and others took office when the economy was booming. It is also known that the US economy and how it functions is derived from many different factors and decisions based on businesses and the consumers in America, rather than government policy. However, Democratic presidents have been more willing to learn from the history of the economy and create policies that will strengthen it overall during their times as President. Republican presidents have also created larger deficits in the economy while Democratic presidents are more aggressive when responding to economic crises during their presidencies (Leonhardt, 2021)*.

A very important and pressing example of a Republican president not being aggressive in changing economic plans based on the country’s current state was former President Trump in light of the COVID-19 pandemic. Trump did not take the COVID-19 pandemic seriously, even going so far as to incite xenophobia against all Asian Americans and the AANHPI community during his presidency. The American economy suffered greatly due to his vague and weak response to the pandemic since the lockdown created job losses and the recession worsened. Trump was the first president since President Hoover and the time of the Great Depression to be in office as there was a decrease in employment.

Democrats have also been much more willing to create jobs and invest in certain industries to achieve that. For example, Democrats are more likely to invest in medical research and clean energy, which take into account new problems in the United States and the world. For example, the research that has started to be done on COVID-19 and the development of vaccines has created more jobs, and the push for environmental justice has created more jobs in renewable energy alternatives.

The conservative parties also benefit from the narrative that the economy will be better if we continue keeping old industrial jobs for the benefit of the lower class and POC. The economy has changed throughout time in the US from the industrial economy to a newer economy, which has thoroughly been discussed in US politics. The industrial economy was based on the production of steel, ships, cars, textiles, etc., that were made in factories which created service jobs that have decreased in the last 50 years. These jobs were mostly available in cities and towns where lower class workers tended to live, while upper class individuals lived outside in the suburbs. After the older, industrial economy decreased due to no longer needing those specific jobs, certain cities experienced economic hardship. This led to the outlook that Democrats and blue states who were in favor of the newer economy were against our community and lower class individuals living in the US, only wanting to push for jobs that were inaccessible to everyone but rich, white counterparts (Judis, 2018).

The conservative parties benefit off of this narrative, however this is greatly misguided. The newer economic strategies that have shown up in the last few decades specializes in pharmaceuticals, semiconductors, movies, and software to name a few. MIT economist Peter Temin named this particular economic outlook the “FTE”: finance, technology, and electronics (Judis, 2018). The cities which were the original centers for the industrial economy are now grasping this new way the economy is working in the US and have thus been able to reinvent their economies. The line where lower class workers lived in the city and upper class workers lived in suburbs has broken down in these particular cities, which is growing all over the United States. This debunks the conservative narrative that new economic strategies are bad for the economy and for lower class and POC individuals. This newer economic strategy is allowing for more jobs and less separation between the classes. It allows all individuals to fully participate in the economy, which is vital to the survival of many families (Judis, 2018).

Based on all of these reasons and all of the data, the economy does do better when it comes to Democratic leadership. The Republican and conservative parties are pushing a narrative to lower class individuals and POC people that they are saving the economy, when in fact their strategies are old and they don’t generate new jobs. With the world changing, the United States needs to invest in certain industries in order to keep the economy booming, which the Democrats are doing, unlike republicans. In order to keep jobs open and the economy booming, we need to vote for leaders and politicians that are very transparent about their economic policies and their plans for the future. We should elect Democrats into the office so that more jobs can be created and more aggressive plans are implemented to keep the economy positive for all individuals within our community.

*based on an opinion piece